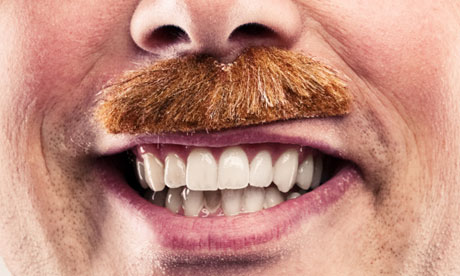 Launched in March, Ginger Joe aimed to grab a share of the a UK Ginger beer market estimated to be worth nearly £22 million.

Introduced by Constellation as an offshoot of Stone’s famous Ginger Wine, Ginger Joe faced a dual-pronged challenge. First, as a new category product, Ginger Joe needed to entice consumers unfamiliar with ginger beer. Second, the brand needed to successfully differentiate itself in a marketplace dominated by leading brand Crabbie’s.

To accomplish this, Ginger Joe went with the mustache.

The bold, red, bushy mustache that Ginger Joe counts as its “mascot” is, of course, a bit of play on terms. While ginger beer in Ginger Joe bottles is derived from ginger root, the term “ginger” is also a (sometimes derogatory) term for a redhead in the UK.

It’s exemplary branding in Ginger Joe’s part, and now the beermaker is extending its ‘stache to social media and beyond in an attempt to grow a little buzz.

In October, Ginger Joe kicked off a £2 million (US$3.2M) ad campaign to drive awareness. The campaign uses both online and outdoor messaging, including a thousand square foot “big hairy” mustache billboard in the East London Shoreditch hip parade district. The billboard started October with a blank red mustache and a QR code and is now crowd-sourced messaging and a giant thank you “for donating to our big hairy poster.”

A second portion of the marketing drive is now on, with Ginger Joe giving away 20,000 bottles its ginger beer to those who “like” its Facebook page. The page currently has fewer than 500 Likes, so what are you waiting for?

Ginger Joe has created a backstory for itself based on “Ginger” Joseph Stone, a “moustachioed London greengrocer and illustrious founder of the noble house of Stone.” Legend claims that Joe “was fanatical about the tantalising taste of the ginger rootâ€¦ and that his first dips in the ginga circa 1740 produced a tipple that literally singed the tips of his ˜tache “ an image now immortalised on every bottle of our refreshingly feisty alcoholic ginger beer.”

Ginger Joe’s use of the mustache is certainly meant to ride the wave of hip popularity the facial hair arrangement has enjoyed in recent years.

The trend pieces on the resurgence of the mustache. In 2009, a New York Times trend piece titled “Inching Its Way Back Onto the Lip” noted the comeback.

Since then, the prevalence of the mustache in popular culture has only grown. The American Mustache Institute is an authority that actually exists. (Latest news: “America’s Most Mustache Friendly Cities.” There are major month-long mustache events twice a year: “Movember” in November and “Mustache March.” The “figure mustache” tattoo has its own Wikipedia entry. From women’s jewelry to baby pacifiers, mustaches are everywhere.

Ginger Joe is hardly the first brand to capitalize on the mustache craze. Just last week, Heinz announced that it would, for the first time ever, remove its Houses of Parliament image from HP Sauce bottles and replace it with a man with a prominent mustache. Heinz will also encourage men to “Grow your Moâ€ in conjunction with the “Movember” activity which aims to raise awareness for awareness for testicular and prostate cancer.

Meanwhile, as the World Series rolls on, Pepsi Max continues to air its ad spoofing the film Field of Dreams. The spot plays on baseball’s most famous mustache, that of pitcher Rollie Fingers.

Posted on December 13, 2013 in Uncategorized