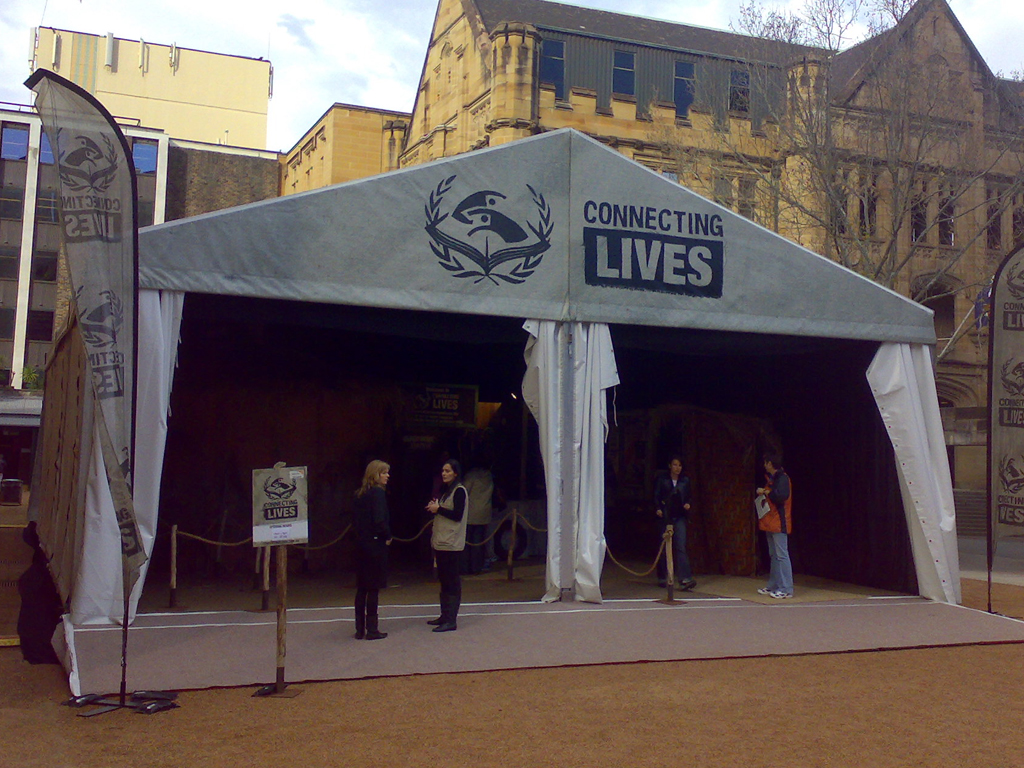 World Vision is known for trying to bridge the gap between the developed and developing world, and its moving Connecting Lives exhibition in Sydney is no exception.

Welcome to Connecting Lives, displays the sign at the entrance, You are about to experience life as you never imagined. Step into the world of an African child.

Connecting Lives isn’t a donation or sponsorship centre, but an interactive gallery that chronicles the life stories of three young, disadvantaged children living in Africa.

On its website, World Vision describes Connecting Lives as an interactive exhibition, with authentic landscapes, stunning visuals and real life environments that will take you into the heart of Africa.

the entrance to the ‘Connecting Lives’ gallery

AusAID, the Australian Agency for International Development, supports the exhibition. According to Zaniah, the Exhibition Co-ordinator, the intention is to raise social awareness with Sydney’s communities in a practical and visual way.

The story you are about to hear is true, narrates the voice on the iPod shuffle that guides you through each life story. Each of the voice-guided story tours take approximately 15 minutes to experience.

Kombo, from Kenya, lives on the AIDS Highway and is one of every three children whose families suffer from the Big Disease: the HIV/AIDS virus. At 8-years-of-age, Kombo has already lost both of his parents to AIDS. His friends disregarded him when he was diagnosed with the HIV retrovirus.

Selamawit, from Ethiopia, is one of the nine million exploited child labourers who earn little over AU$1 a day for eight hours of work, often without having breakfast. She is employed on a construction site and, as a vulnerable young girl, is exposed to sexual molestation near and around her own community.

Innocent, from Uganda, is displaced by the tragedies of war one of the 850,000 children who live in a displaced persons camp. At 9-years-of-age, she already suffers from poverty and orphanhood. It is said that parentless households are common in her region.

Everyone is moved by these stories, admits Zaniah, â€œbut some people choose to remain ignorant.

The childrens stories are presented through African-style huts. Each hut contains photographs of their lives and replicas of their personal objects and surroundings. Bedrooms and kitchens have been recreated, by World Vision Australia, to achieve authenticity. The aim of this is to contrast their Third World quality of living with the First World experience in Sydney.

At the end of each story, participants are given the opportunity to reflect on their experience. A prayer or reflection can be written on provided paper notes that can be posted on a specially provided corkboard, with other wishes. A number of these are promises to take further social action.

Many booklets, pamphlets, and other flyers are available to be read and taken-away by those who choose to learn more. Information is also available of the ˜Connecting Lives website: www.connectinglives.com.au or by emailing connectinglivesenq@worldvision.com.au

Six statistics hang from a wall inside the gallery that confront other issues, such as: pregnancy related deaths, malnutrition, child labour, and other causes of deaths of children that World Vision Australia considers to be preventable. For example, a demonstration can be offered of what World Vision believes is a step towards decreasing the deaths of newborns by raising sanitary conditions; a birthing kit. The kit contains gloves, a plastic sheet, soap, and a razor blade.

Due to positive public response, Connecting Lives may stay open until January 2012 instead of October 2011 as previously planned, at 134 William Street, Potts Point, 2011. Booking is essential and entry is free-of-charge.

Tim Costello, World Vision Australia CEO, publicly encouraged: â€œConnecting Lives appeals to both adults and youth as it carries the visitor into a world that most Australians could never imagine living in.

World Vision does not recommended the exhibition for children under 12-years-of-age.

I covered a public presentation for option 2 of the journalistic articles.

I personally visited the Connecting Lives exhibition on Thursday, 26 May 2011. Three days before, on Monday, I made a booking on connectinglives.com.au. The next day I was invited by both email and phone to attend by Zaniah the co-ordinator. I explained to her on the phone that I wanted to write a journalistic article on a public presentation for a final major assignment for university. I told her that I needed to conduct first-hand research and write an article on what I the newsworthiness of Connecting Lives. She accepted this and offered to talk with me about the experience when I was finished with the exhibition.

Before beginning the walk-through, it was explained to me that the stories would be quite confronting. For each of them, I was given a different iPod shuffle and set of headphones that guided me through the gallery: telling me where to move, what to observe, and what to listen to every step of the way. I found that the huts were quite realistic. They were well crafted to evoke what I would imagine the style of a real African hut  in Kenya, Ethiopia, and Uganda would be like.

While we often hear, on the radio, or see, on the news, of how devastating such conditions can be, we usually forget about it once the coverage segment is finished. We don’t really get the opportunity to experience something like this. Of course its not the same as physically visiting Africa but it can still be emotionally confronting. This is how I knew that it was newsworthy and interesting it makes you think. Its of general interest to a wide readership because it covers social research on life can in the 21st century, without being too factual.

I had to rewrite my article a couple of times to make it more objective than subjective. That was my greatest challenge about writing this piece, but Im confident that I achieved an objective article in the end.

I went back a second time to get the article approved and checked by Zaniah, which is when I re-took the photo (as posted above). I had to re-take it because I wasn’t happy with the first set. I captured the photo as soon as I arrived at the gallery because it would have been too dark to do so by the time I would have left.